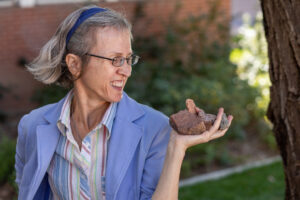 As a planetary geomorphologist, I study the shapes and landscape of the surfaces of planetary bodies to gain insight into their formative processes and to discern past and present influences.  The ultimate goal is to contribute to understanding the distribution, movement, and evolution of material in our Solar System and its present or potential niches of habitability.

My approaches in this work involve the use of spacecraft images and topographic data, combined with field work on appropriate terrestrial analogues, and mechanical experiments.  Geographically, my research interests include both rocky objects in the inner Solar System and icy objects in the outer Solar System.

Current interests in the inner Solar System include aeolian processes, specifically the origin of aeolian sand on Mars. Sand is wide-spread on Mars and the discovery of that this sand is in motion, which likely breaks it down, highlights the decades-old question as to the origin(s) of Martian sand. We’re testing one hypothesis — the volcaniclastic hypothesis –in the Aeolis Dorsa region of Mars.

An enduring interest is in fluvial (river-related) landscapes.  Externally-funded fluvial research has included investigations of multi-billion-year-old fluvial deposits on Mars.

Field work on Earth, most effectively at the Quinn River in the Blackrock Desert of Utah, has provide insights for the Mars work.

Also in the outer Solar System, a primary area of investigation is tectonic processes on icy satellites.  This work, begun at the Earth and Planetary Science Department at the University of Tennessee, substantially built on that department’s strengths in terrestrial tectonism and structural geology.:

Another interest is aeolian (wind-related) processes and landscapes.  NASA-funded investigations include analysis of orbital images of wind-scoured landscapes on Mars and planetary wind-tunnel experiments to understand aeolian sediment transport on Titan.  These experiments, which take place at the NASA Ames Research Center Planetary Aeolian Laboratory in Mountain View, CA, use a unique facility for which I led the refurbishment.

In addition to experimentally investigating aeolian processes on Titan, I also participate in experimental investigations into fluvial processes through using a cryogenic tumbler – the Titan Tumbler – to quantify the rounding and size-reduction rates of analog fluvial sediments for comparison to image data.

A new area of research is small bodies, a particular strength of the new Astronomy and Planetary Science Department at Northern Arizona University. My involvement in this area of planetary science includes organizing and participating in work to support NAU development of spacecraft mission concepts relevant to asteroid research. The indefinite deferral of the SIMPLEx mission call has put this work on the back burner, but we hope to pick it up again as soon as possible.

For additional information about recent research interests, please see my group research page https://burr.utk.edu/ at the University of Tennessee.